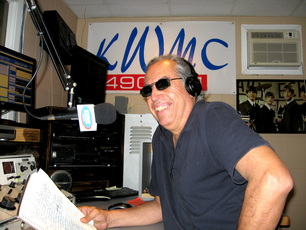 Influenced by famous disc jockeys on XERF, Paul Kallinger and Wolfman Jack. He became interested in the oldies and doo wop music of the early 50's having grown up during the rock n' roll era.

Over the years he has funneled his passion in his one hour show on Monday, Thursday and Friday and a two hour show Sunday night on KWMC 1490Am. Monday and Friday mornings he plays music from the 50's, 60's and 70's on the Rock Oldies Show from 10:30 to 11:30. Thursday its the 70's show which features music from that decade. Sunday he presents Cruisin' Sunday Night from 7 to 9 which features doo wop, slow jams and some infrequently heard music. He adds trivia about the music and artists acquired from numerous sources. Mesta plays music from his personal library which includes about 7,000 45's and 3000 albums.

"What I like about radio and music that is long gone by is that music is over 40 years old and is just as popular today as it was then. Hey, rock n' roll forever."