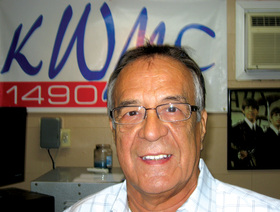 Javier A. Martinez, started his radio career at the age of 16,  broadcasting baseball games, in his native Zaragoza, Mexico. He moved to Del Rio, TX. and worked as a spanish program director and sales for KDLK (1976), managed radio stations in Acuña Mexico XEDH and XHPL 1979-1984, part owner of KTDR 1985, Publisher of Texas Times a Monthly Magazine since 1991.

He also participated as a TV personality for KTRG Channel 10  Del Rio,  and Telemundo Channel 22 Eagle Pass, TX.  Right now host of Town Talk Live, and sales manager for KWMC 1490AM, since 1997

Lector of St Joseph Catholic Church, and Founder of the Hispanic Chamber of Commerce , he’s been providing live information on election results, and been Master of Ceremonies at The Brown Plaza on every 5 de Mayo and Dies y Seis since 1976, something that he really enjoys!